Along with being editor of California Kayaker Magazine, I act as a kayak safety boater for over a dozen open water swims each year. In doing this, I have seen all sorts of things, both good and bad, from the other kayak safety boaters, so wanted to post some info to help kayakers understand what is expected of them should they sign up to be a safety boater. 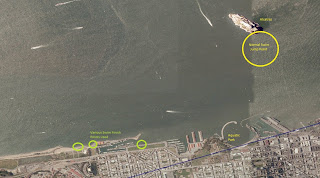 This is targeted for kayakers doing safety boating for the large Alcatraz swims. Specifically, the swims that go from Alcatraz and land some place between Marina Green and Crissy Field (click on the picture to left to see large size). Events like Alcatraz Aquathlon, Escape from Alcatraz Triathlon, SF Triathlon at Alcatraz, etc. These events take place during strong ebb tides and call for many kayak safety boaters.

There are many other open water swims in the Bay (Alcatraz to Aquatic Park swims, Bridge to Bridge swims, trans-Golden Gate Bridge swims, etc.), and the specifics of the strong ebb tide and its impacts may not be relevant for those events (though they too generally have their own impacts from tides and currents).

Should you be there?

The Alcatraz swims I am referring to here happen when there is a strong ebb.  This ebb tides brings about a few issues, both for swimmers and kayakers.  The first we will cover is waves.


Tidal currents form tide rips where the moving water hits other currents, land, or underwater rocks. The main impact of tide rips on safety boaters is that they form waves.  Add in wakes from power boats (and big ships), wind waves, and such, and you have a challenging place in which to be paddling. The video to the right shows the type of waves that are common.  Much larger waves than those shown here do occur (but are too large for me to hold a camera while keeping myself upright), and you need to be prepared for them.

So safety kayakers need to be prepared, both with appropriate skill and appropriate equipment, to deal with waves. It is unfortunately common for a safety boater to sign up and get to the mouth of Aquatic Park only to see the harsher bay conditions for the first time and decide it is not for them. And they bail out. This is not fair to the event organizers, who are counting on kayakers to be able to do their job.

Worse are those who go out and then need to be rescued. The rescuers are generally other kayakers, which means that both the rescuers and rescuee are now unavailable to work the event. This compromises the safety of the swim doubly.

So, you need a boat that can handle the conditions, and the knowledge and experience to know you can also.

On boats, sea kayaks or sit on top kayaks are most common. Both have pros and cons, but the main similarity is that if you get knocked out of either, the boats will still float. Recreational type boats, those wide boats with large open cockpits, are not recommended, as they have limited built in floatation which may not allow you to get back in should the cockpit be filled with water. Of course, this assumes you know how to get back in/on to whatever boat you use should you flip over...

Once you have chosen your boat, you should also have experience being in conditions similar to what you might see. Do not choose to support a swim in order to find out if you can handle the rougher conditions. You should have experienced them before and know you can do it.

Even with the boat and knowledge, you should be self sufficient. The saying with kayaking is to dress for the water temperature (which in the SF Bay is very cold). Wear clothing that will keep you safe and comfortable even if you do end up taking an unexpected swim, and have snacks and water with you to keep yourself fueled.

Effect of ebb on kayakers - getting out to the start

Along with creating waves, the moving water from the ebb tide also, well, moves. It is going from the bay towards the ocean, usually at about 3 mph. You need to cross this current to get from the launch at Aquatic Park to the waiting point at Alcatraz. The current is going around 3 mph, and a cruising speed for a kayak is also around 3 mph. So if you point your boat straight to Alcatraz, which is about a mile from the mouth of Aquatic Park, and then paddle, you will end up a mile to the west of Alcatraz.

The solution is two fold:

If you do miss and end up west of Alcatraz, you will have a fight to get to the start. Remember you average 3 mph and the current is going 3 mph. One option is to sprint, but this is exhausting. A better option is to use the eddy formed west of Alcatraz. Alcatraz blocks the water flow, and there is a shadow in the current west of there where the current is not going out the gate, but actually is a back current heading toward Alcatraz. If you get in this, you will get a ride to the island. Look for the change in the waves (they get larger and choppier) and for a line of trash and sea foam paralleling the current, which will mark the eddy line. Cross this line and ride the flow back toward the jump point.

Effect of ebb on swimmers

If you think it is hard to paddle to Alcatraz, it is even harder to swim.  Swimmers only go about 1-2 mph, versus the 3 mph ebb. This means that they are moving faster sideways toward the Golden Gate Bridge than toward San Francisco. This is done on purpose - the finish is way to the west of the jump point, so a slow swimmer can swim straight south toward San Francisco and the current would move them west to the finish.

No swimmer can aim directly toward the finish. The pros up front generally know what they are doing, so rarely are an issue. But the slower the swimmer, the more south (directly toward the closest part of San Francisco) they need to aim.

The problem is that even though the swimmers are told this, many either forget or didn't listen, so try to swim directly toward the finish. By not taking into account the ebb tide current, they are pushed west quickly. And the current is faster than they can swim. Once they get too far west, their only option is to get pulled out by a powerboat. Corralling the swimmers who head too far west is a lot of work for the safety kayakers, and can't be fun for the swimmers who are constantly being told to correct their course, but it is even more disappointing for the swimmers when they get pulled.

If the swimmers are only slightly west, they may still be able to finish (particularly if the finish is Crissy Field) by swimming to the beach west of the finish and then running to the finish.

Swim coach Leslie of Swim Art Open Water Swimming emphasizes "It is extremely important  to guide the medium to slow swimmers STRAIGHT SOUTH on this type of swim, particularly those on the west side of the pack. They should never be aiming directly toward the finish point."

Many people doing these swims have never swum in open water before. The experience is a bit different than a pool or a lake for them. Some of the impacts you will find are:
If you have a VHF marine radio, bring it so you can talk to other safety kayakers and power boats. But, if you have to make a call to other boaters, keep in mind that the entire area is very large and it is hard to figure out who is who. Be clear on what you need, who you are ("safety kayaker in blue kayak at back on west side"), and if they need to come to you, raise your paddle also.  And only use it for really important stuff (if you just need to get someone pulled and you and the swimmer are doing fine with them resting on your bow, just raise your paddle until someone comes - save the radio for when someone needs to be pulled fast or if none of the power boats sees you after a few minutes).


Definitely pay attention at the kayaker safety briefing before the swim.  The info I posted here is generally true for most events, but some events may have specific rules or changes you should need to be aware of.

There are a lot of reasons to be a kayak safety boater for a swim - it is fun, you see other kayakers, you are given a stipend which offsets the costs of getting to the water, and you help hundreds of swimmers achieve their goals and dreams of swimming from Alcatraz. But you should only do it if you are prepared to handle the conditions.
Posted by California Kayaker Magazine at 11:01 AM 4 comments: