This is the first of what we hope to be many reviews that will be posted on the California Kayaker Magazine blog. These reviews will be on various kayaking-related products that we weren't able to publish in the magazine for one reason or another, but are still on products that might be of interest to our readers.

This first product we are covering is the Cobra Surf Ski. Beyond the duck-billed platypus’s nose, what intrigued us was that it was made of rotomolded plastic. We though this might be a good entry-level surf ski – a boat that provides the speed and training benefits of a surf ski, using a more rugged material at an entry-level price.
First, what is a surf ski? Wikipedia describes them as “Typically 16½-21ft long and only 16-20" wide, surf skis are extremely fast when paddled on flat water (only an Olympic K1 or K2 kayak is faster) and the fastest paddled craft available over a long distance on ocean swells. They track well but are less maneuverable and have less transverse primary and secondary stability than shorter, wider craft. Despite its typical instability, a surf ski (with an experienced paddler) is a very effective craft for paddling in big surf. Its narrowness and length helps it cut or punch through large broken waves. Double bladed paddles are used, often with highly contoured wing blades for extra efficiency.”
Two reviewers tested out the boat. They were PD (6’ 220 lbs, surfski novice) and KL (5’5” 125 lbs, owns a Futura brand surfski which is used for fitness paddling).
Form and Fit:
PD: The boat fit me well, but there was not much more room to move the foot pegs for anyone much taller than I. I am also at the stated weight limit for the boat, but it seemed to work fine. Likely I was sitting lower in the water, so had a wetter ride, than someone lighter would have.
KL: The seat cup back was more comfortable than my Futura.  It didn’t have a back band, and felt like it needed one less than my Futura (which doesn’t have one either). The seat bottom on the Cobra was a little uncomfortable, as I could feel it flexing and if felt like I was riding on my tailbone. Seat padding would probably fix this.
KL: The foot peg adjustments are great if you rarely adjust. Replacing the allen-head bolts with wing-bolts (like what is on the Futura) would make adjustments more convenient.
Performance: 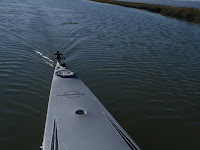 PD: The Cobra definitely feels like a surf ski–in other words, fast and tippy. In the half dozen times or so I have paddled it, I never flipped over, but it does feel unsteady until you get used to it. As I have often heard, surf skis are much more steady when you are moving, and that holds true for this boat also.
KL: The Cobra felt more stable than my Futura. It weighs about 10 lbs more and is a couple feet shorter. I didn’t do a head to head comparison, but it likely was somewhat slower than my Futura, as would be expected from a boat that is shorter, heavier, and wider. Still, it seemed to take much less effort to paddle it than to move my 68 lb sea kayak.
PD: I tracked speeds with a GPS and found that I was between 0.5 to 1.0 mph faster in the surf ski over a distance than I am in my 17’ 6” touring sea kayak. May not sound like much, but that is about a 20% increase in speed!
PD: We did do recovery practice to make sure that should we flip over, we would be able to get back on, and we were able to do a cowboy scramble type recovery. It takes a little more balance than a sea kayak, but with the low deck and being a sit on top, it in many ways is easier than doing this type of recovery in a sea kayak. For more information on how to do a cowboy scramble, see the skills article in Issue #7 published Fall 2011.
What is with that funny looking nose? 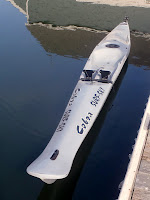 Surf skis are said to have originated in Australia and used by lifeguards for surf rescues. One of the designs they came up with was a flared nose to prevent the bow from diving when surfing down large steep waves on the way back in to shore. Most currently made surf skis now are not used in surf zones, so don’t have this design.

To see some surf skis with these noses being paddled in large surf (about the upper limit of what these boats should be used in), take a look at a video of an Australian race series at http://youtu.be/d-6gE-nZE1k. Probably not Cobra boats in the video, but ones with similarly funny looking bows...
Who should paddle this:
This does seem like it would be a good starter boat for someone who wants to try surf skis. You pay a bit less than composite boats, but get a heavier boat. For more advanced paddlers, with the plastic being more indestructible than composite, this could be a good trainer boat or for times when you will be in more aggressive conditions (such as in the surf).
Specifications:
Length: 17'4"
Width: 20"
Weight: 46 lbs.
Capacity: 220 lbs.
MSRP: $1580

More Information and to find dealers:
http://www.cobrakayaks.com/surf_ski.html
Posted by California Kayaker Magazine at 5:05 PM No comments:

Email ThisBlogThis!Share to TwitterShare to FacebookShare to Pinterest
Labels: Review

I am writing to announce some changes at California Kayaker Magazine. Effective immediately, the Winter 2011 issue has been canceled. And for 2012, we will only have 2 issues - Spring and Summer.

The magazine has always been more of a labor of love for me than a money-making opportunity. I’ve known from the start that this would never be something that would make me rich, but I did (and still do) have hopes that it would at some point more than cover its costs. The Summer 2011 issue did that, but unfortunately, the Fall issue slipped back into being a loss. And based on preliminary ad sales, the Winter issue would also be a loss.

Unfortunately, my other sources of income, which I had been using to keep the magazine afloat during startup, have seen cuts such that I can’t afford to carry the magazine right now.

The Spring and Summer issues have been in greater demand by both advertisers and readers, so the plan is to publish just these issues for 2012. There are a sizable number of “seasonal” advertisers who only want to promote their businesses in Spring and Summer. And readership is also higher, as more people are interested in kayaking during these seasons (and some shops in the mountains and tourist areas reopen, after seasonal closures). So the plan for 2012 is to focus on these two issues.

I am sorry that I have to make these changes. Feel free to post a comment or email to me any questions, or any comments or suggestions on how I should take this magazine forward.

Posted by California Kayaker Magazine at 11:31 AM No comments: